It did not take long for our group of three to become more than strangers in August on our Donjek glacier hike in Kluane National Park. Coming from Quebec, France or the Yukon, we all brought our share of good mood and energy to the group! And that was a good thing because on the first day we had to work together, quickly, to set up camp before the rain hit us. We were in the Burwash Uplands, way past the tree line and the rain that was starting to fall would not stop until the next day at lunch. It’s at times like these that having the right gear is critical to stay dry and warm!

When crossing the tundra the next day, on our way to Burwash Creek, the cold wind sweeping the plateau forced us to keep going to not get cold until we reached shelter in the shrubs. Luckily, the rain stopped then and we could enjoy a well-deserved warm lunch! 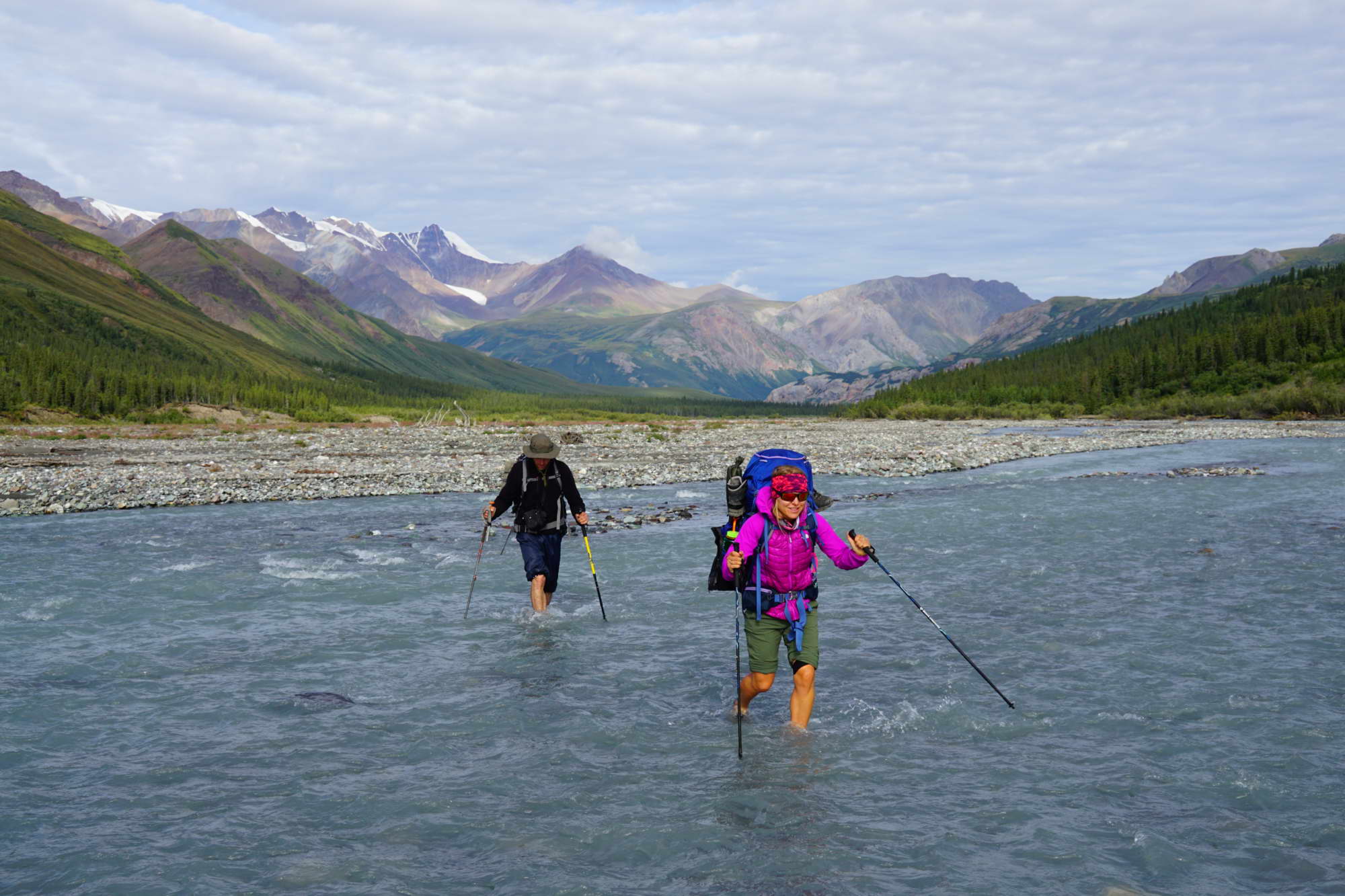 As we were approaching camp and the border of Kluane National Park, we saw a w   olf on the other side of Burwash Creek. It did not seem to mind our presence (we were about a kilometer away from it) and was headed straight to where our camp was. Unfortunately, we did not see it past this observation, but once we got to camp, we understood why the wolf was coming this way: there were Dall sheep everywhere in the area, above camp in the rock outcrops, across the river, further up the mountain towards Hoge Pass. This was clearly there home and we were just passing by!

We hiked up Hoge Pass the next day, feeling that the weather was about to change. The clouds were breaking up, allowing us to see the magnificent view on the mountains in the heart of the park. At the end of the day, once we reached camp in the middle of the huge Donjek River valley, the Sun was shining and we spread all our wet and damp gear out and before sun down everything was dry again!

The next day, day 4, is the day we reached the Donjek Glacier by following the old horse trail through the forest and the willow. A kilometer or so before reaching the front of the glacier, as we were crossing a small creek bed, we spotted a grizzly bear about 50 meters away from us, sitting down in berry bushes. It was starring at us saying “don’t come any closer”! We cautiously walked around and left the area as quick as possible.

Our heart rates had just come back to normal when we saw a group of four grizzly bears, crossing the dry river bed coming out of the old terminal lake of the glacier. It was a female and her three cubs (probably 2 years old). Luckily for us, we were downwind from them so they did not pick up on our presence until they were far away. By then we had a chance to leave the area without disturbing them, ensuring safety for the group. That was by far the most exciting wildlife observation we had on this backpacking trip!

Camp was not far from where we encountered these bears, and carried away by the excitement of what we just saw and the fact that we made it to the glacier, we came down the hill below camp and went for a swim in the iceberg filled glacial lake!

The Donjek trek is not only a hiking adventure, it’s also an experience where one learns how to read the land, interprets the signs of passing time on the mountains and understands the geomorphological phenomena that take place around the glacier. In fact, for those who are interested, understanding what is happening between the glacier and the terminal moraine is a real challenge! Through our trips around the Donjek Glacier, the terminal area has never looked the same: sometimes a lake is covering the entire zone, sometimes only half, some other times the lake is completely gone and reveals a fast-flowing creek digging its way through gravel and ice, right at the snout of the glacier… Two river beds are visible exiting the terminal lake area, one being 15m higher (altitude) than the other, we have seen both flow at different times. 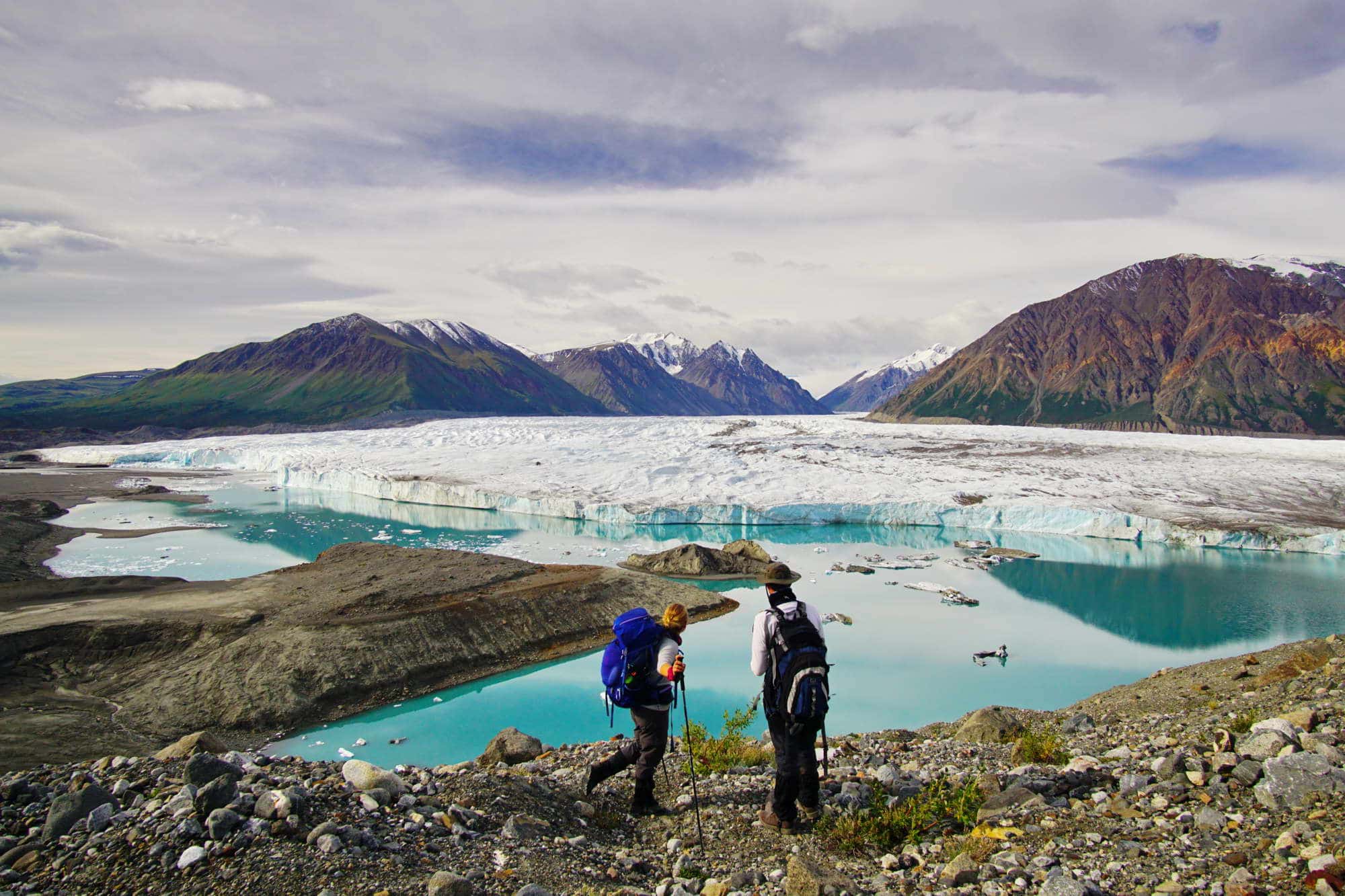 In an effort to better understand what’s going on, we contacted a team of glaciologist who have worked around the Donjek Glacier in the past and have shared with them our observations and photos. They had no idea ice was hiding underneath the gravel at the bottom of the terminal lake… Need less to say this is all fascinating and brings an educative side to the adventure!